What We Do in the Shadows

What We Do in the Shadows is a 2014 mockumentary film written and directed by Jemaine Clement and Taika Waititi, who also star in the film. It was initially premiered at the Sundance Film Festival on 19 January 2014, before later being released in New Zealand on 19 June 2014.

A documentary crew follows four vampire roommates — Viago, Vladislav, Deacon, and Petyr — who share a flat in the Wellington suburb of Te Aro, and have granted protection to the crew (who are wearing crucifixes) for the duration of the filming.

Each night, Viago, Vladislav, and Deacon take the bus into town and prowl the streets of Wellington for people to kill. Because they cannot enter buildings without invitation, and must stay in the flat during the day to avoid sunlight, the three have not adapted to 21st century life. The vampires also regularly encounter and trade insults with a pack of werewolves, led by Anton, as part of an ancient rivalry between werewolves and the undead.

One night, Deacon meets his human familiar, Jackie, to request that she bring virgins to the flat so that the vampires can feed on them. She lures Josephine, a woman who insulted her in primary school and Nick, her ex-boyfriend from when they were 12, to the flat. While the vampires are disappointed that neither are actually virgins, they attempt to kill them anyway. Josephine is killed, while Nick briefly manages to escape before being attacked by Petyr. Nick survives the attack and is turned into a vampire.

Two months later, the vampires accept Nick into their group and bond with his human friend Stu – a computer analyst who shows them how to use modern technology. Viago uses the internet to hunt down his former love interest Katherine, who is now a 96-year-old widow living in a rest home in Wellington. He also finds and briefly reconnects with Phillip, his old servant, who placed the wrong postage on Viago’s coffin and extended his journey to New Zealand – leaving Katherine the time to find a new love before Viago could arrive.

Despite being able to get his new friends into more popular bars and clubs, Nick struggles to adapt to life as a vampire. Nick is also held in contempt by Deacon, who resents Nick’s newfound popularity and his careless revealing of his vampirism to strangers he meets. One of these strangers, a vampire hunter, breaks into the flat basement during the day and kills Petyr by exposing him to sunlight.

The vampires are furious when they discover Nick has indirectly caused Petyr’s death, and Deacon tries to kill Nick before being interrupted by a police welfare check from officers O'Leary and Minogue. The police gloss over the corpses of Petyr and the vampire hunter, instead warning the vampires about the numerous fire hazards inside the flat. Once the police leave, Nick is tried by the remaining vampires: he is banished from the flat using the infamous Procession of Shame, though Stu is permitted to come as he pleases.

Several months later, the vampires receive an invitation to the annual Unholy Masquerade, hosted for the local undead population of vampires, zombies, and witches. Vladislav refuses to attend after learning that “The Beast”, a vampire that destroyed much of his power, will be attending as guest of honor, and attempts to stay home bidding on online auctions. When Viago and Deacon arrive, they find in attendance Nick, Stu, and Jackie – who (much to Deacon’s chagrin) has been turned into a vampire by Nick. “The Beast” is soon revealed to be Vladislav’s ex-girlfriend Pauline, who has gone through multiple violent breakups with Vladislav. When Pauline realizes that Stu and the camera crew are human, the other party guests threaten to kill and feed on them. The flatmates are soon joined by Vladislav, who fights with Pauline’s new boyfriend Julian to protect the humans. Julian almost kills Vladislav, but Stu saves him by impaling Julian with a large stick. In the chaos, the vampires escape the ball with Stu and the camera crew – but encounter Anton’s werewolves in the park, about to transform due to the full moon. One cameraman is disemboweled by a werewolf, and Stu becomes separated from the vampires and cornered. The vampires hold Nick back, believing the werewolves are too dangerous, and they watch as Stu is viciously mauled. Believing Stu to be dead, the vampires run away and grieve for him.

After a few days, Nick returns to the flat with Stu and Anton’s pack. Stu reveals that he survived the attack and transformed to a werewolf that night, escaping the local police – who blamed the death of the cameraman on a local pet dog. With Stu’s urging, the pack is allowed to visit the flat and reconciles with the vampires – and Nick’s banishment is rescinded. Viago also decides to reconnect with Katherine, whom he turns into a vampire and rekindles his romance with.

Scenes during the credits reveal that Vladislav has gotten back together with Pauline and Jackie has made her husband Terry her new familiar. A post-credits scene shows Deacon attempting to hypnotize the audience to forget the events of the film.

The film is based on a 2005 short film, What We Do in the Shadows: Interviews with Some Vampires, written and directed by Taika Waititi and Jemaine Clement, and starring both directors plus Jonny Brugh, Cori Gonzalez-Macuer and Stu Rutherford. All five actors reprised their roles for the film apart from Clement, who originally portrayed a vampire named Vulvus the Abhorrent.

The film was shot in Wellington. Clement and Waititi wrote 150 pages of script but chose not to show it to a single person involved in the film (both crew and cast) in order to keep things spontaneous. About 125 hours of footage was shot, most of which was improvisation from the cast. The process of editing it down to a 90-minute movie took almost a year.[1]

The directors were able to bring screenings of the film to the United States after a successful Kickstarter fund-raising campaign.[2]

The film has led to two spin-off television series: Wellington Paranormal, which focuses on the two police officer characters Minogue and O’Leary, and What We Do in the Shadows, a mockumentary series focusing on four vampires living together in Staten Island, New York.

Jonathan Brugh reprised his role of Deacon in the solo theatre show Deacon the Vampire Live.

A possible sequel to the film, We're Wolves, has been proposed by Taika Waititi. The film will focus on the werewolves featured in the original film.[3] 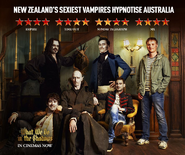 UK poster
Add a photo to this gallery

Retrieved from "https://whatwedointheshadows.fandom.com/wiki/What_We_Do_in_the_Shadows_(film)?oldid=2553"
Community content is available under CC-BY-SA unless otherwise noted.